The ravens of Raven’s Rock

All day ravens fly from the forest east of Bedepuszta to the Hollókö, loosely translated: the ‘Raven’s Rock’. By car it is more than half an hour to this village, which in 1987 was included in the UNESCO world heritage list. At the same time, Hollókö is the first village you come across when you walk or cycle the country roads from Bedepuszta to the west.

Following the ravens to the west, the old castle of Hollókö forms part of the horizon after the second ridge. There is a short 8 km route along the creek, but this path is often muddy. A better, stunning, route leads through the valleys and over the hills. On foot you can cover 12 km in just over 2 hours, with the bike it’s just over half an hour.

The road leading to Hollókö features a striking statue of a huge raven. From here the road winds to the top of the hill, where there’s a modern hotel restaurant and a carpark. From here a path leads up to the old castle which can be visited every day and which, besides being a topic of Hungarian legend, played a role in the Hungarian-Turkish wars.

Down in the valley lies the old village Hollókö. The village and the land behind it have had the same structure since the Middle Ages. The architecture, white mud houses with brown, wooden verandas and a overhevelend dak aan de voorkant, are characteristic of the Palóc culture, which in some respects has survived the test of time. Until the eighties this village was closed off from the outside world. On holidays, some of the 500 inhabitants still walk in traditional clothing.

The village has been tastefully restored in recent years. Shops and workshops are located in the cottage where all kinds of locally made products are sold. There is a cheese maker, who experiments with cheeses and makes a fantastic kefir, as well as a winemaker, who makes wines on a few hectares with Hungarian grape varieties, a baker, who bakes delicious treats and a few young potters who clay and paint classic agricultural Hungarian pottery. Elsewhere, baskets are braided or leather belts are cut. Also special are the jugglers, located in the first house you encounter, who run a shop with old games and logistic games.

There are three restaurants in the village. The first, Muskatli, serves authentic and nicely-made local dishes. The overhanging barn is also open outside when the weather is nice. Attention! The restaurant is only open during the day. Right next to Muskatli is Vár Etterem. It has a nice terrace to have a drink, but maybe skip the food, which is nothing to write home about. On top of the hill is the hotel restaurant Castellum, a luxury wellness hotel with a modern restaurant. 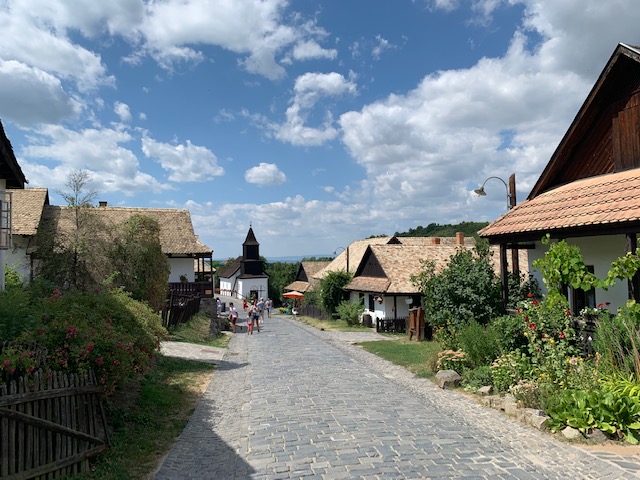